A stroke occurs when the brain is deprived of sufficient blood flow, interrupting the delivery of necessary oxygen and nutrients.

A stroke is a medical emergency, as brain cells begin to die in minutes and prompt treatment is crucial. Early action can reduce brain damage and other complications.

There are two main types of strokes:

There are also transient ischemic attacks (often called “mini-strokes”) that resemble strokes but last for a much shorter period of time, resolve spontaneously and generally do not cause permanent damage to the brain.

What Causes a Stroke?

There are two main causes of stroke: a blocked artery (ischemic stroke) or the leaking or bursting of a blood vessel (hemorrhagic stroke). The underlying causes of stroke, however, are often multifaceted and may include risk factors that are beyond the control of the patient (such as being over the age of 55), as well as controllable lifestyle choices that include being a smoker or using illicit drugs.

Some of the most commonly cited risk factors include:

What Are the Symptoms of a Stroke? 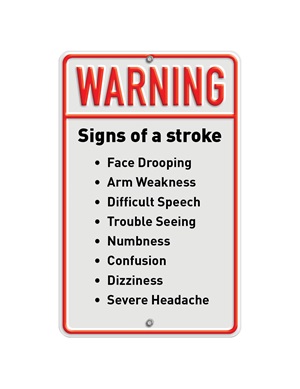 Both ischemic and hemorrhagic stroke and transient ischemic attacks share many of the same signs and symptoms, such as:

These symptoms typically come on suddenly, and they require immediate medical attention. If you think you’re having a stroke, call 911.

How Is a Stroke Diagnosed?

When you arrive at the hospital, multiple tests will be quickly performed to rule out other possible causes of your symptoms and determine which type of stroke you’re having.

How Is a Stroke Treated?

Emergency treatment for stroke depends on whether you're having an ischemic stroke (blocked artery) or a hemorrhagic stroke (bleeding into the brain).

Treatment for ischemic strokes can include:

Treatment options for hemorrhagic strokes include:

Tampa General Hospital was named one of the top hospitals in the country for stroke care for 2022-23, according to U.S. News & World Report. TGH is also recognized as Honor Role Elite Gold Plus for Stroke Care by the American Heart Association.