Tampa Bay Lightning, Tampa General Hospital Team Up For "We Are TGH" Night 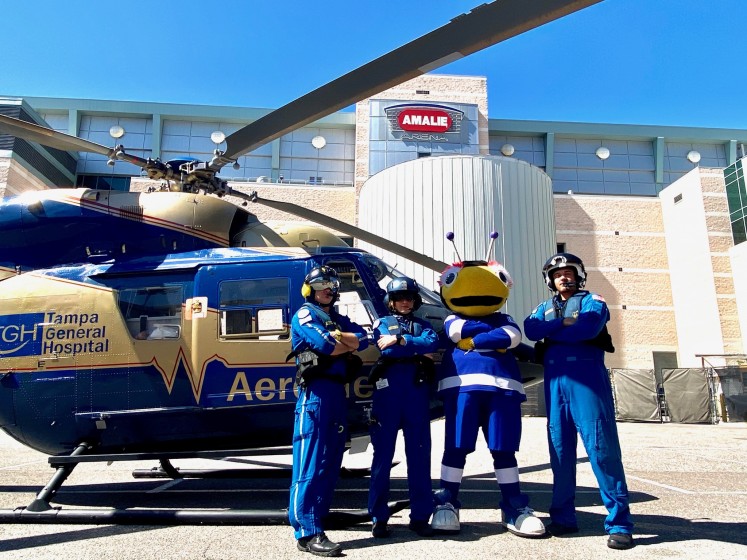 TAMPA BAY – The Tampa Bay Lightning will celebrate “We Are TGH” night, presented by Tampa General Hospital on Thursday, March 5 when they host the Montreal Canadiens at 7 p.m. at AMALIE Arena.

Throughout the day, the Lightning and TGH will be celebrating first-class hockey and world-class care, starting with a blood drive on Ford Thunder Alley. Bolts fans are encouraged to help save a life and support organ transplants by donating blood between 9 a.m. and 3 p.m. All donors will be given a $10 e-gift card valid for multiple locations and an insulated water bottle.

Tampa General Hospital has one of the country’s largest and busiest organ transplant programs, recently ranked 6th in the nation based on the number of transplant patients. Due to its high volume, its physicians have the true expertise to perform surgeries which result in better-quality outcomes for patients. Eva Boney, a 9-year old pediatric kidney transplant recipient, will be at the game inspiring fans through the Lightning game day experience, including a chance to high-five the players as they take the ice.

Fans are encouraged to arrive early to Ford Thunder Alley before the game to participate in interactive games and join TGH professionals in learning important life-saving tips. There will be giveaways for fans to enjoy, including a free rally towel, courtesy of TGH, for all fans in attendance.

Other highlights throughout the night include special features with Tampa General’s Aeromed Team, the TGH emergency helicopter transport service that has been flying for three decades.

“We are proud of our partnership with the Tampa Bay Lightning. This is an exciting night for our team members and patients as we celebrate the life-saving care our doctors, nurses and other medical professionals deliver every day,” said John Couris, President & CEO of Tampa General Hospital.

“The Lightning are very excited to host TGH night at AMALIE Arena,” Lightning chief executive officer Steve Griggs said.  “Tampa General represents the best in world-class care and is a vital community partner.  We look forward to honoring their team’s commitment to making Tampa Bay a better place to work, live and play.”

The Tampa Bay Lightning and Tampa General Hospital are two world-class organizations with deep roots in Tampa Bay and a mutual belief in supporting the people of the region.  The two recently announced a naming rights partnership for the Official Training Facility of the Lightning in Brandon, which is open to the public and home to youth and adult hockey leagues. The facility is now known as the TGH Ice Plex.