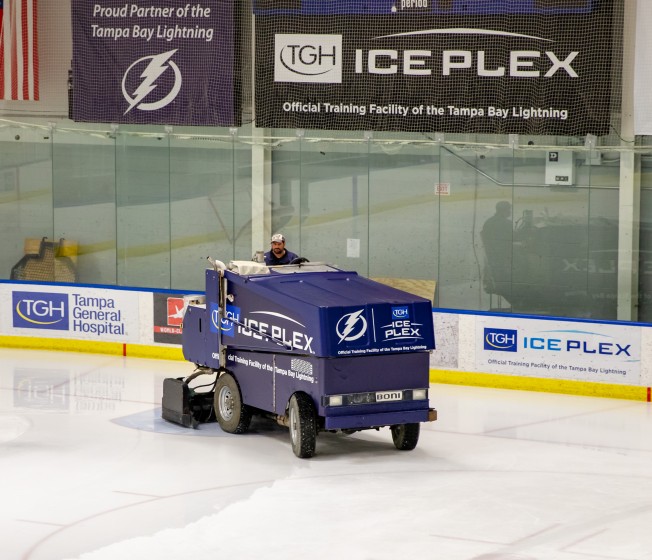 Tampa, FL (Jan. 27, 2020) – The Tampa Bay Lightning today announced Tampa General Hospital as the new naming rights partner of the now former Ice Sports Forum, the Official Training Facility of the Lightning. The Ice Sports Forum is now the TGH Ice Plex®. Entitlement of the team’s training facility is part of a multi-year partnership extension between the team and Tampa General Hospital with other key partnership elements including in-ice logo placement at AMALIE Arena and signature consumer engagement and activation platforms.

“Our naming rights agreement made so much sense on so many levels. The TGH Ice Plex is a facility where families come to create great memories together and celebrate birthdays and milestones; where numerous high school and youth hockey programs compete; and where our world champion Tampa Bay Lightning practice. From the TGH Ice Plex to our TGH Brandon Healthplex, providing East Hillsborough county with care from the finest medical staff in the Bay area, TGH is proud to support and be a part of this community. Providing world-class health care while supporting an active lifestyle is a keystone of TGH,” said TGH President & CEO, John Couris.

“The Lightning are extremely proud to be extending our already long-standing partnership with Tampa General Hospital today,” Lightning chief executive officer Steve Griggs said. “Tampa General is a pillar of the Tampa Bay community and we’re excited that they will be bringing their world class name to our team’s practice facility. We are confident that not just our hockey team, but everyone who visits to the TGH Ice Plex, will enjoy a heightened experience. The Lightning would like to thank Tampa General Hospital and Tom Bradley, owner of the TGH Ice Plex, for almost two decades of valued support.”

“When we were approached with the idea of rebranding the Ice Sports Forum in a partnership with Tampa General Hospital we said ‘absolutely!’ TGH is a first-class institution with a strong community presence,” said TGH Ice Plex owner Tom Bradley. “We are honored to be partnering with TGH and the Lightning. Through the team’s grass roots efforts to expose and promote hockey in our community, coupled with their accessibility during practice and training sessions here at TGH Ice Plex, we see interest in hockey at an all-time high. The Lightning players training at the TGH Ice Plex is a very cool experience for our skaters as they compete on the same ice as the Bolts each day.”

The TGH Ice Plex has served as the Lightning’s practice facility since 1997, and in 2018 the two signed a 10-year lease extension in conjunction with the building of a new team off-ice facility. It is also instrumental in the team’s community hockey efforts, hosting numerous on-ice camps and clinics throughout the year. The TGH Ice Plex has one of the highest adult hockey participation levels in the country with more than 100 teams in various leagues, including youth rec leagues and travel teams ranging from mini-mite to high school.

The Lightning’s privately funded $6 million facility was completed in 2018 and created a world class locker room and training facility for the team. The TGH Ice Plex also invested $500,000 at the time in the project on rink, glass and dasher board upgrades. The new facility is 18,000 square-feet, whereas the previous space was only 5,500.

The TGH Ice Plex will be celebrating this new exciting partnership by inviting fans to a free public skate event on Friday, February 7 from 3-4 p.m. Complimentary refreshments and free skate rentals will be provided. Space is limited and will be assigned on a first come, first served basis. Attendees are encouraged to RSVP to secure their space by visiting http://sptimesforum.formstack.com/forms/tgh_ice_plex_public_skate_rsvps.