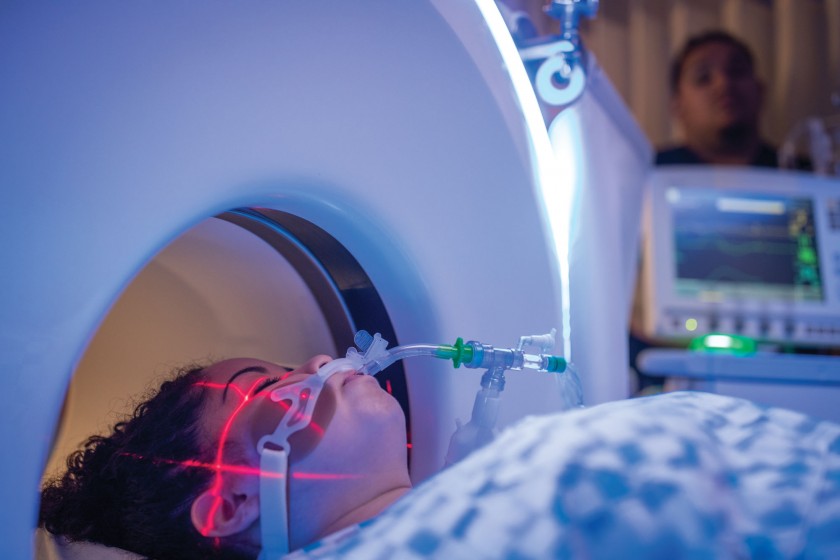 Laser interstitial thermal therapy (LITT) is an emerging technique used to treat epilepsy and primary and metastatic brain tumors with a small incision as opposed to open surgery. It can reach lesions that might otherwise be considered inoperable. LITT can also benefit patients with health conditions such as heart disease or cancer that render them too high-risk for traditional brain surgery.

LITT is minimally invasive, requiring only a 2-millimeter incision in the scalp. Surgeons use real-time MRI to guide a small laser catheter through the hole to the brain. The catheter is heated to temperatures high enough to destroy tumors or brain malformations. LITT can also target lesions responsible for epileptic seizures and Parkinson’s disease. Because the procedure is guided by MRI images, it is highly precise. Surgeons destroy only the targeted tissue, leaving healthy surrounding tissues unharmed (< 1 mm or in the sub-millimeter range).

Not only is there little to no pain, less scarring—only one stitch is generally required—and minimal hair removal, LITT patients are usually released after a single night’s hospital stay and have few if any complications.

“We use MRI technology to place cursors on the edges of the tumor or lesion to specify where the heat should be,” says Yarema Bezchlibnyk, MD, PhD, Co-Director of Tampa General Hospital’s Comprehensive Epilepsy Program and the Movement Disorders Neuromodulation Center. “It creates a color-coded heat map that shows the targeted tissue turning from blue (cold) to red (hot).”

LITT is especially beneficial for patients who do not respond to stereotactic radiosurgery or have radiation necrosis. Neurosurgeons at Tampa General have used this technique to successfully treat more than 20 patients.

Because the laser procedure delivers no (ionizing) radiation, it can be repeated multiple times and there is no need for a brain flap. Patients experience little to no pain and the probe site heals quickly with minimal scarring. Most patients recover and are discharged after a one-night hospital stay with few complications.