Tampa General Hospital is First in Florida to Use New Organ Transplant System That Allows Donor Hearts, Lungs and Livers to Function Outside a Human Body 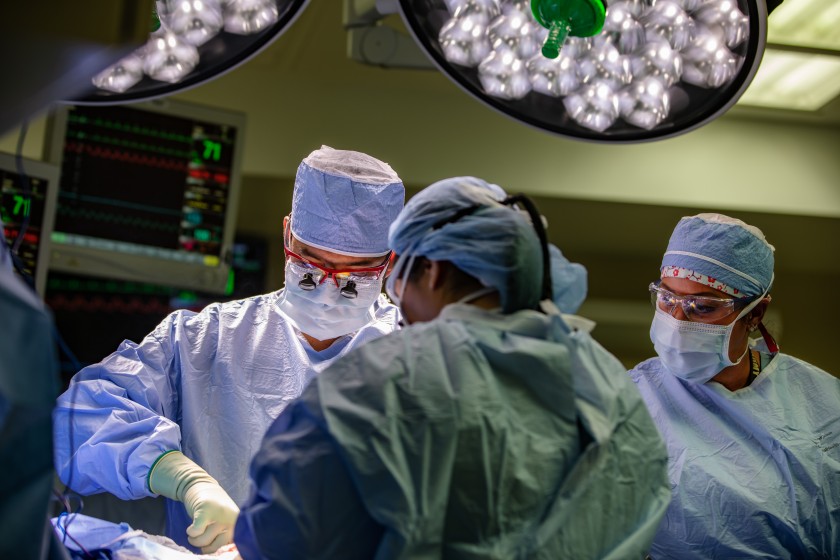 Tampa General Hospital is the first in Florida to adopt and use a sophisticated organ transplant system that is designed to increase the number of donated hearts, livers and lungs that can be used to save the lives of patients.

The new Organ Care System (OCS™) technology allows a donated heart to keep beating for several hours outside a human body as it is transported to the hospital. This process, called normal temperature perfusion, keeps organs functioning almost as if they were still inside human bodies. During this process, hearts beat, livers produce bile and lungs simulate breathing, all inside portable machines. The OCS machines are manufactured by TransMedics, Inc., of Massachusetts.

“We can maintain the organs for longer periods, which means we can recover them from a wider geographic area,” said Dr. Kiran Dhanireddy, executive director of the TGH Transplant Institute.  "And, the condition of the organs at the time of transplant is better," compared to traditional methods.

Tampa General Hospital is the only hospital in Florida and among a handful in the United States to be using or formally studying the process for all three of these organs using the Organ Care System technology. The first lung transplant in Florida using this system was performed at TGH last year. TGH’s Transplant Institute is one of the top 10 transplant hospitals in the country by volume, having performed more than 11,000 transplant operations.

The normal temperature perfusion process has already been approved by the FDA for use in lung transplant patients. TGH has conducted five liver perfusion transplants as part of a clinical trial.

At times, organs are transported to Tampa General from other cities. The traditional method is to use medical coolers for these journeys, which can sometimes take hours. The organs do not perform their normal functions while being transported in cold storage, but their health is preserved for several hours.

The OCS uses a different approach—transporting organs at near body temperature.

In OCS machines, blood, oxygen and nutrients constantly flow through the organs, just as they would inside a human body. So instead of merely being preserved, the organs continue functioning inside the machines. The flow of blood through the heart prompts it to continue beating. The liver produces bile – one of its essential activities. A ventilator puffs air into the lungs. A computer tablet-like device allows surgeons to monitor the health of the organs in route to the hospital.

Organs can survive longer in OCS machines than in traditional coolers. While a heart can survive in a medical cooler without a blood supply for roughly four hours, muscle cells will start to die as time goes on. But in the OCS, the heart still pumps and receives blood, so cells can survive longer. “Hearts that would have gone unused can be assessed and recovered in this manner, so they can be used for more patients who desperately need a new heart,” said Dr. Lucian Lozonschi, the new chief of Cardiothoracic Surgery and director of Heart Transplantation at TGH.

The process has been shown to reduce the number and severity of rejection episodes in lung transplants, and organs in some cases actually get healthier after being placed in the OCS machines. For example, a potential donor who is on a ventilator in a hospital might develop fluid in their lungs as a side effect. But this can clear up when the lung is placed in the OCS. This improvement means more organs are likely to become medically suitable for transplantation.

The new technology increases organs available for donation. Currently, lungs are transplanted from patients who have become brain dead. But the OCS also allows transplants from patients whose deaths are classified as cardiac death, which has the potential to expand the donor pool by about 25 to 30 percent.

“At TGH, we use technology and innovation to meet the needs of our community,” said Dhanireddy. “OCS allows us to expand the organ pool by having access to a wider geography of donors, which allows us to save more lives through transplantation.”

People who need transplants include those with emphysema, cystic fibrosis, interstitial lung disease or other severe conditions. Traditionally, lungs come from deceased donors who have suffered brain death. The OCS also allows the use of lungs from those who have suffered cardiac death.

In the OCS machine, air is ventilated into the lungs while they are being transported, allowing them to “breathe” almost as if they are inside a body.

The FDA has approved the use of the OCS for lung transplants.  And Tampa General Hospital performed the first such lung transplant in Florida on Oct. 22, 2019.

People who need transplants include those with diseases that prevent the liver from performing its essential body functions.  Livers come from deceased donors who have suffered brain death or cardiac death. Partial liver transplants sometimes come from living donors.

In the OCS machine, blood, oxygen and nutrients flow through the donated liver and it produces bile, one of its essential functions, almost as if it is inside a body.

Tampa General Hospital is participating in a multicenter national clinical trial to evaluate efficacy of the OCS for liver transplantation.  After the conclusion of the study, the results will be used to obtain FDA approval for clinical use.

People who need transplants include those who have advanced heart diseases but are healthy enough to be well with a transplanted heart.

Currently, hearts come from deceased donors who have suffered brain death. The OCS is being used to explore the potential for using hearts from patients who have died a cardiac death.

In the OCS machine, blood is sent into the heart, which prompts the heart tissue to activate electrical impulses and begin beating.

Tampa General Hospital participates in the clinical trial on the use of OCS for heart transplantation.