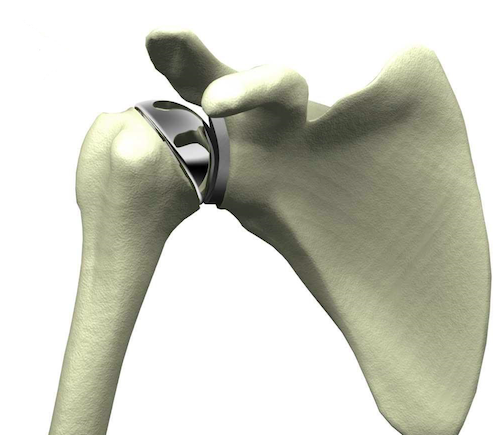 Tampa resident Michael Beleele was riding a dirt bike in Idaho 20 years ago when he crashed, hitting the dirt at 45 mph.

“I destroyed my right shoulder,” he said. “I had no use of my right arm at all. I couldn’t even pick up a cup of coffee.”

The first surgeon Beleele visited told him that he couldn’t fix the injury – but he had an idea. Another surgeon had a brand-new technique for shoulder surgery, he told Beleele. So Beleele went to see Dr. Mark Frankle, an orthopedic surgeon on the medical staff of Tampa General Hospital.

Frankle told Beleele about the device he helped design and patent. Called a reverse total shoulder prosthesis, the device switched the normal ball-and-socket placement of the joint to provide better movement and stability. Beleele, a technician whose job required that he lift and carry heavy cylinders, figured he had nothing to lose and got the surgery.

It restored nearly complete function to his arm.

“It was far more effective than I thought it would be. It’s really been a lifesaver for me,” Beleele said. “Had I not gone through that, I would have had to retire or completely change careers.”

At Tampa General, Frankle was one of the first shoulder and elbow specialists in the U.S. to recognize the scarcity of available treatment solutions to reduce pain and improve shoulder function for patients with severe rotator cuff problems.

In the early 1990s, Frankle began collecting patient data to determine the best way to help them regain and even improve their mobility post-surgery.

Frankle performed his first reverse shoulder replacement surgery at TGH in 1997. He continued refining the custom implants he used, and today is recognized as the leading expert in the U.S. on total reverse shoulder surgery by the American Academy of Orthopedic Surgery. He also currently serves as the President-Elect of the Society of American Shoulder and Elbow Surgeons.“It is a point of pride that TGH was the biggest contributor of patients and surgeries to the studies that led to the FDA approval,” Frankle said.

Frankle and his team have performed over 6,000 total shoulder replacements since the first procedure in 1997, and he performs approximately 250 shoulder arthroplasties a year.

Beleele, now 70, is among them. Since he got his first operation twenty years ago, he’s returned to Frankle twice for revision treatment – once when he tore his shoulder lifting 40-lb. cylinders on the job and once in 2012, when he was working as a military contractor in Afghanistan and came under rocket attack. He landed on his shoulder while diving for cover. His right shoulder continues to function well.

“I’m an adrenaline junkie,” said Beleele, who also has had both knees replaced and a wrist repaired with plates. “I’m just not good at it.”

Beleele is still a fan. Last fall, he went to visit Frankle again.

“My other shoulder is bothering me,” he said. “It looks like at some point I’ll be a candidate for surgery on the left side.”