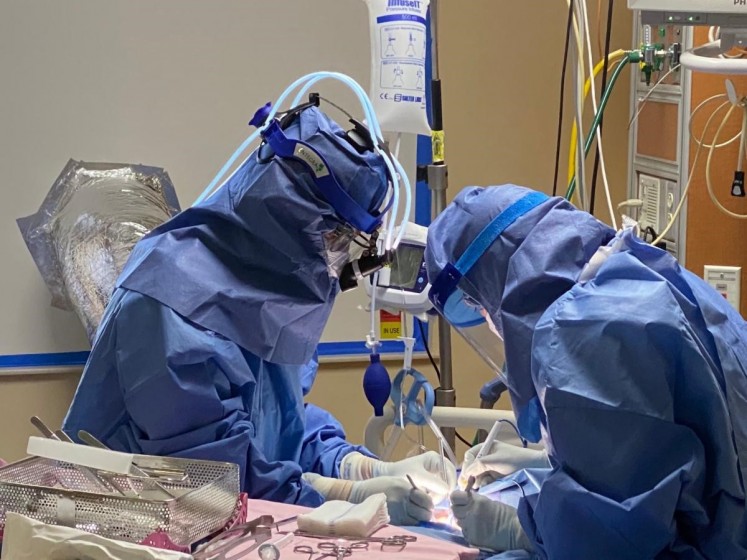 As an intensivist at Tampa General Hospital, Dr. Francisco Brun cares for some of the sickest patients in a hospital known for complex care.

But when a young mother arrived at Tampa General, barely breathing and hovering near death, even Brun was surprised.

“She had horrible ARDS in her lungs,” Brun said. “Her lungs were like a rock. It was one of the worst things I’ve seen. She had three tablespoons of lung function when she came in.”

Just 34, the patient contracted COVID-19 while pregnant with her second child. After delivering a healthy baby via C-section while 35 weeks pregnant at a community hospital, she became sicker. Her condition was so critical that a Tampa General Hospital surgeon flew to the community hospital to put the patient on ECMO, or extracorporeal membrane oxygenation, and then flew back with her to Tampa General.

Had he not done so, “she probably would have died that night or the next day,” Brun said.

Once she arrived at Tampa General, ECMO gave her lungs a chance to rest and to heal. And it gave a team of Tampa General’s best a chance to care for her – from almost every specialty in the hospital. At some point, specialists who cared for her included those from cardiology, cardiothoracic surgery, endocrinology, ENT, infectious disease, internal medicine, obstetrics and gynecology, palliative care, pulmonary / critical care, and radiology, as well as teams of nurses and allied health professionals.

Her treatment included therapies that targeted COVID directly, such as Remdesivir and convalescent plasma, but also tackled a chain reaction of other problems, including heart rhythm problems, thyroid function and obstetrical bleeding.

“She was an all-around team effort, that’s for sure,” said Dr. Andrew Myers, director of Inpatient COVID Care at TGH. “For this lady, it shows what a great team and institution we have to come together and work together to save this young lady’s life. Individually, we couldn’t have done this, but we had everyone’s expertise ready to be used.”

It also shows how the relatively new role of intensivist can help coordinate such complex cases.

“It’s kind of a new thing, the intensivist role,” said Brun, who also is the medical director of the TGH Cardiothoracic ICU and one of several intensivists who helped care for the patient. “It’s like having a quarterback to help coordinate things. This is an example of where that can help.”

As the patient gradually began to get better, Dr. Matthew Mifsud, a head and neck surgeon and assistant professor in the USF Health Morsani College of Medicine, performed a tracheostomy in order to help the patient begin transitioning to breathing on her own. These procedures involve more risk for the medical team with COVID patients because of the potential for the virus to aerosolize.

“Originally there was an assumption that a trach wouldn’t be useful to patients like her, because of the possibility of spreading the disease,” he said. “But you can only leave someone on ECMO and sedated for so long. At some point, they can’t make any forward progress.”

In order to be able to perform tracheostomies on such patients, Mifsud and the TGH team developed a detailed protocol for the procedures, including donning and doffing routines, time outs, and cart and sterilization procedures.

“You have to get out of your normal routine and figure out a new protocol on how to get procedures like this done safely,” Mifsud said. “This helps get the team comfortable and allow you to cast aside unnecessary fears, so that you can maintain good patient care. That’s what everyone came together to do here.”

Soon after, the patient recovered enough to leave TGH, returning to her local hospital to continue her recovery near family. For Myers, who also is a USF assistant professor of Internal Medicine she is a symbol of Tampa General’s willingness to take on the most complex patients – and put together a team who can care for them.

“She went from having to have blood oxygenated to a machine to now she’s going to be able to go home to her two daughters and husband,” Myers said. “It makes me proud to be part of TGH.”