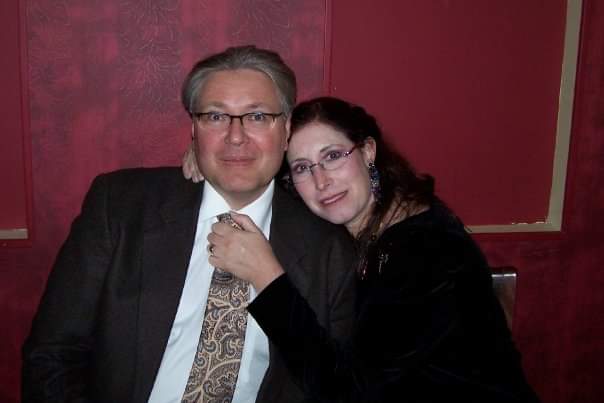 Abby and Michael Blackburn have been an item since they first met as college students at Georgia State University almost 40 years ago while working at the university radio station. They’ve been happily married 35 years this coming September.

About 12 years ago, life changed dramatically for the couple when Abby blacked out and fell face-first to the ground in their home. She woke up and saw blood and called 911. Michael was out of town.  “I don’t remember much but remember the blood and knew I had to call an ambulance,” recalls Abby. She doesn’t know how long she was on the floor until the ambulance arrived.

Abby was stabilized at a nearby hospital and then transported to Tampa General Hospital’s Neuroscience Intensive Care Unit. She spent eight weeks in the Neuro ICU, followed by six weeks in critical care and six more months of outpatient, in-home rehabilitation. She does not remember any of her time in the ICU, which is very common for brain injury patients.  Reflecting back at her inpatient rehabilitation, she said, “I lost everything and was relearning to walk. I remember every day walking near the water.”

Because of the brain injury, Abby developed hyperacusis, a highly debilitating hearing disorder that increases sensitivity to sounds. Everyday sounds can be extremely irritating and disturbing to those afflicted with the condition.

A couple of years had passed after the accident when Abby and Michael decided to try out the hospital’s brain injury support group. They’ve been hooked ever since.  “I had to do something. And we’ve been regulars since then,” said Abby.

“It’s nice to hear everyone talk because I thought it was just me (who felt that way) and I now know it’s not just me”, said Abby. “To hear what other people with brain injuries are doing helps.”

“The support group is not just focused on the survivors, but caregivers, too,” said Michael. “We get as much from the other patients and families as the doctors and nurses.”

Dr. Angelica Acree, the clinical psychologist who has managed the brain injury support group for about nine years, adds, “our patients have told us there is nothing like this in the community.  The patients can participate in a group with others who understand their challenges in an environment without much noise or distraction. Group members provide support, knowledge, and understanding for one another. It provides an atmosphere to connect with one another and share experiences. Some participants travel over an hour to be a part of the group,” she said.

Each month, the group focuses on a different topic such as “Parenting after Traumatic Brain (TBI) Injury,” “Coping with Emotional Changes after Brain Injury”,  or “Driving after a TBI.” Sometimes the group has an open discussion in which group members share their experiences and concerns. Since the COVID-19 pandemic began, safety measures had to be put in place, and the group has had to take a hiatus. However, the Rehab Center is exploring the possibility of meeting virtually through Zoom or Microsoft Teams until they can meet in person again.

“I’m lucky. I got my Abby back and we’ve become friends with some of the other support members and have enjoyed dinners together at each other’s homes,” said Michael.

Abby is no longer able to work, but she enjoys many activities at home, including sewing, baking, and gardening. Michael is semi-retired. They miss the temporary break from the group but look forward to seeing their fellow support group friends again.