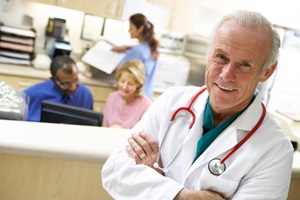 Thoracic surgery, or chest surgery, is a type of procedure that involves the organs of the chest, as well as the trachea, chest walls, and the esophagus. As with most surgical procedures, the skills and tools involved in this unique type of surgery are continually changing and evolving, and Tampa General Hospital is at the forefront of these developments. With a team of highly trained medical professionals who have years of experience working in this specialized field, TGH is one of the busiest thoracic surgery hospitals in the region. We utilize many industry-leading surgical methods and tools, including the da Vinci® robotic machines, which are often used for minimally invasive video-assisted (VATS) surgery. Director of thoracic surgery, Dr. K. Eric Sommers, is one of the most experienced thoracic surgeons in Florida. He has performed thousands of thoracic surgeries during his tenure, as well as hundreds of robotic-assisted procedures using the da Vinci® Surgical System.

We treat the following types of thoracic conditions at TGH.

Lung cancer is the leading cause of cancer deaths in the United States. Smokers are at a greater risk for developing lung cancer, and the more a person smokes, the greater the chances of developing cancer. However, non-smokers can also develop the condition. In most cases, the signs and symptoms of lung cancer do not appear until the cancer reaches a more advanced stage. Some of these signs and symptoms include a persistent cough, shortness of breath, bone pain, headache, and hoarseness. There are several different types of cancer that can affect the lungs, including:

Adenocarcinoma is a type of cancer that forms in the glands of the body, but it can affect the lungs as well. When in the lungs, it can cause the symptoms often associated with lung cancer, including weight loss, coughing, bloody mucus, and exhaustion.

Bronchioloalveolar carcinoma is a type of lung cancer that forms in the outer layer of the lungs. It can spread either along the tissue that separates the individual air sacs on the lungs or through the airways. It can appear as one spot or as multiple spots scattered across the lungs. There are two main types of this lung cancer – non-mucinous and mucinous, with the former being the most common but the latter being the most common among non-smokers.

Squamous cell carcinoma of the lungs is a type of non-small cell lung cancer. It often occurs in the central, or middle, part of the lung, or in one of the main airways. Because of where the tumor forms, it can lead to coughing, breathing problems, chest pain, and blood in the sputum. This type of cancer is one of the most common among smokers.

A superior sulcus tumor, also known as a Pancoast tumor, can be found within the chest wall and lungs. It is often localized to the apex of the lung, the rounded upper extremity of the organ, with the potential to migrate to other areas of the chest, such as the brachial plexus, first ribs, vertebrae, subclavian vessels, or stellate ganglion. Because of its position, it can cause symptoms such as arm or shoulder pain.

Esophageal cancer is a type of cancer that forms in the esophagus, which is a long, hollow tube that helps move food from the throat to the stomach. Esophageal cancer often begins in the cells that line the inside of the esophagus. Signs and symptoms of this type of cancer include unexpected weight loss, coughing, an increase in indigestion or heartburn, chest pain, and difficulty swallowing.

Emphysema is a lung condition in which air sacs in the lungs are damaged. Over time, the inner walls of the sacs break down, causing the normally small holes to enlarge. This reduces the surface area of the lungs and decreases the amount of oxygen that reaches the blood stream. Shortness of breath is one of the most common symptoms of emphysema, and it typically worsens as the disease progresses, leading to shortness of breath even while at rest.

Pulmonary metastases, or lung metastases, is cancer that starts in another area of the body and spreads to the lungs. It is often also referred to as secondary lung cancer. The types of cancer that most often spread to the lungs include breast cancer, colorectal cancer, and kidney cancer. The cancer usually metastasizes near the edges of the lungs and in the lower lobe. Persistent coughing, shortness of breath, and frequent chest infections can all be signs of pulmonary metastases.

The chest cavity is a cage made of bone and muscle and framed by the sternum, ribs, and spine. This area of the body is home to many vital organs, including the lungs and heart. This area is susceptible to tumors, both benign and malignant, that can cause problems with breathing, swelling, and pain. TGH offers treatment for a wide range of chest tumors, including:

The pleura is the membrane that covers, or wraps around, the outside of the lungs and lines the inside of the chest cavity. The layers of the pleura contain a small amount of fluid that help with breathing. There are many different pleural disorders, all causing a wide array of symptoms, such as chest pain, shortness of breath, fatigue, and unexplained weight loss. Some of the disorders often treated at TGH include:

Thoracic outlet syndrome is a term that describes a combination of disorders that occur when the nerves, or blood vessels, in the collarbone and the thoracic outlet are compressed. The syndrome is often a result of physical trauma or repetitive injuries, but it can also occur due to pregnancy or birth defects, such as an extra rib. Common symptoms of this condition include experiencing pain in the shoulders, arms, and neck, as well as numbness in those areas and in the fingers.

The thymus is located near airways and blood vessels in the middle of chest. Because of its position, the thymus can press on nearby organs or structures if compromised by a disorder. This can cause chest pain, shortness of breath, weight loss, coughing, and other uncomfortable symptoms. TGH can effectively treat a wide array of thymic disorders, including:

The trachea, or windpipe, is a tube made out of cartilage that starts below the larynx and continues down the breastbone and splits into small tubes that lead to the lungs. With any trachea disorder, the trachea or bronchi becomes blocked, leading to difficulty breathing and other problems. Whether the trachea has been narrowed because of inflammation, breakage in the cartilage wall, or a tumor, TGH can provide treatment. Common trachea disorders we treat include:

Tracheal neoplasms are tumors that either originate in the trachea, or windpipe, or that have metastasized to the area from other sections of the body, such as the larynx, lungs, esophagus, or thyroid. These tumors can narrow the opening of the trachea, which can cause a restriction of air flow to the lungs, resulting in wheezing, shortness of breath, difficulty swallowing, and upper airway infections. Tracheal neoplasms can be either malignant or benign. TGH offers treatment for all forms of tracheal neoplasms, including: