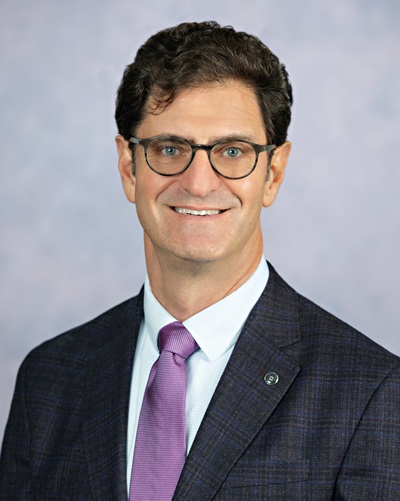 It has been an eventful year to say the least for Dr. Murray Shames. In April, he was named the Richard G. Connar Endowed Professor and Chair of Surgery at the University of South Florida. In addition to this prestigious role, Shames recently added to his impressive resumé with another new, high-profile title: Tampa General Hospital’s Chief of Staff.

Shames is proud to serve in his dual affiliations, yet part of his vision now in his TGH role is to create a cohesive identity at the hospital.

“My goal is to unite both TGH and USF as we grow stronger together,” he said. “I want to create a culture that when you walk in the door, we’re trying to make the organization better. It’s not just about any of us individually. It’s about building the organization, helping the faculty, focusing on quality, professionalism, efficiency in state-of-the-art patient care — and doing all we can to make Tampa General Hospital the world-class organization that it is.”

From a personal perspective, Shames’ journey has been heavily entwined with TGH. He was a general surgery resident from 1994 to 1999 and has served as a USF Vascular Surgery faculty member since 2002.

“I’ve been connected to Tampa General Hospital in one way or another for nearly 30 years,” he said. “I’ve watched it transition from a county general hospital, to a not-for-profit hospital to a dynamic, integrated academic health care system.”

Shames credits President and CEO John Couris and Dr. Charles Lockwood, executive vice president for USF Health and dean of the USF Health Morsani College of Medicine, with truly defining TGH’s and USF’s mission and transition to a top-tier academic medical center. He sees his own mission over the next several years as creating a cultural change at TGH — in guiding the hospital’s medical staff to be in alignment with the vision of TGH leadership to create a world-class academic medical center.

“We have outstanding physicians — in the community, private practice, employed by Tampa General, and employed by the University of South Florida — and one of my key objectives is to get everyone on the same page and pointed to the same north star,” he said.

At the same time, Shames remains extremely passionate about USF. Following his residency and doing fellowships at the University of Sydney and Washington University, Shames returned to USF 20 years ago as a faculty member — the start of a distinguished relationship with the university that has included five Platinum Achievement Awards, and a 12-year run (2009-2021) on the list of Best Doctors in America.

He was named program director for Vascular Surgery in 2005, and in 2007 launched one of the first integrated vascular surgery residency programs in the country. Ten years later, he was named USF’s Chief of the Division of Vascular Surgery and Vice-Chair of Operations for the Department of Surgery, setting the stage of his new role as department chair.

Shames serves as the principal investigator on numerous clinical trials and mentors dozens of general surgery residents, vascular surgery trainees, and medical students. He has authored and coauthored more than 90 peer-reviewed publications and numerous book chapters as well as being a regular speaker at national and international vascular surgery meetings.

“At USF, we have great people, a great training program and teach outstanding medical students to become top-tier surgeons through our residency programs,” he said. “But do we want to be Tampa General Hospital and USF separately or do we want to be the next Johns Hopkins, Michigan Medicine or Massachusetts General? I want to aspire to being the product of both organizations together.”

Balancing his many responsibilities might appear daunting, but Shames is unfazed by the challenge.

“The key is building a really good team,” he explained. “My clinical work has certainly decreased, though I still have a robust practice and really love doing vascular surgery and big, complicated aortic surgery, and taking care of my patients. But I hired two new junior vascular surgeons this year, and they’re picking up some of the volume, and we’ll be recruiting a new vascular surgeon division chief soon. So I’m focused on a little delegation of responsibilities and building relationships.”

As he moves forward as TGH Chief of Staff, Shames adheres to the leadership model put forth by Mr. Couris — built on Authenticity, Kindness, Transparency and Vulnerability. “We really need to be kind, and treat people fairly and respectfully,” Shames said. “The transparency part is setting clear expectations and holding people accountable.”

Shames grew up in South Africa and slowly gravitated to leadership roles. “I was a smart kid but wasn’t the one who got picked to be on any sports team,” he said. “In time, I became more involved in leadership opportunities. In college (at the University of Pennsylvania), I was a board member of our fraternity, and in medical school (at Albert Einstein School of Medicine in New York City), I was chair of this and that. It’s not that I wanted to be the boss; I wanted to be part of the solution.”

In Shames’ new capacity at TGH, that is a goal he embraces to the fullest.