By Phil Buck and Dave Scheiber 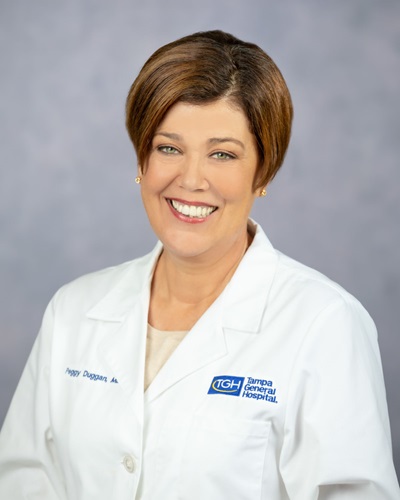 When Dr. Peggy Duggan reflects on the recent challenges posed by Hurricane Ian, she feels a special sense of pride as Tampa General Hospital’s executive vice president & chief medical officer. Watching physicians race selflessly into action to provide TGH’s world-class care to patients as a potentially devastating storm took aim at Tampa Bay was, in her own words, “extraordinary.”

For a native New Englander experiencing her first hurricane, Duggan knew the key to a successful response was having a solid plan in place — and executing it well.  The former chief medical officer who previously served at Boston’s Brigham and Women’s Faulkner Hospital came away from the experience with greater insights into how to handle the next major storm event. She was also impressed by the great teamwork displayed by TGH team members throughout the storm.

“Watching the team come together was incredible,” said Duggan, who was honored this summer by one of the nation’s ultimate team entities. She was named by Hall of Fame Health — an affiliate of the Pro Football Hall of Fame that supports former players and their families — as one of five physicians to its esteemed Medical Advisory Board.

We talked to her about what she learned from preparing and weathering Hurricane Ian — and how that will inform TGH’s response to the next hurricane.

Q. What are some of the unique ways hospitals and health care workers must navigate during a hurricane that the general population doesn’t think about?

A. Our goal and our plan was to be isolated for five days. You must be prepared to be at the hospital, caring for patients, doing your job, and sleeping when your shift is over in unusual environments. The whole organization has to be prepared to be truly isolated during that span of days. We’re on an island, which poses a particular challenge for this organization since we are such an important care provider in the community.

One of the things we focus on prior to any event like this is, ‘Can we safely send patients home where they'd be best off?’ For Hurricane Ian, we still had many patients in the hospital, and that required a great deal of extra work. It would have been easier if we could have sent more patients home, but they just weren't ready. So, we had to prepare to take care of them. They were really stuck here without their family members. And it was a lot for our people to work through. After we knew we weren't going to be in the line of real destruction, it became an incredible team-building experience. Overall, we learned a lot preparing for this and will be even stronger and better for another hurricane.

Q. How does this compare to extreme weather that you dealt with in New England?

A. Snow is just a lot easier to deal with. The water here is really destructive, and the wind and water together are so dangerous. We saw some of our colleagues to the south really suffer. I’ve been in Florida less than two years, and it’s a sobering experience to have a hurricane come this close. I’ve seen them my whole life at a distance. But being only two hours away from the point of impact makes you think very differently about the risk.

Q. Are there any specific lessons you took away from the experience?

A. Planning was big for us. I know that for Hurricane Irma in 2017, planning was not as well organized — from a physician’s standpoint of who needed to be in the hospital to care for patients. For Ian, in a very short span of time, we were able to organize who had patients admitted and what services needed to be covered. You can’t come in and out of the building. If someone has chest pains and needs cardiac catheterization, we need everyone here. Working through all of those specialties and making sure we had all the people here that we needed, was a great learning experience.

What we’ll do now in the future is plan things out before the hurricane season starts and determine who’s agreed to be Team A and Team B. That will help us a lot. It was a ton of work for my team to do in a matter of days, but they did a great job. But we won’t do it that way again. Hospital operations did a terrific job meeting the challenge of finding everyone a place to sleep. But we’ll have a pre-made plan for the sleeping arrangements going forward. I swore when I was in New England that I would never sleep in a hospital again, but here I was!

Q. What was it like to watch TGH’s response team in action, deploying the AquaFence and springing into action?

A. It’s such a well-oiled machine. One example is Donna Tope, a facilities leader, who came in and said, ‘I’ve been assigned sleeping arrangements.” And she just went right to work coordinating everything. That’s the central point. We know our facility so well. We know the risks and what it takes to be ready. And the team just coalesces around that. Several things really make a difference for Tampa General. The AquaFence is enormously important. The power plant being elevated is vital. We really believe the facility is so well maintained that it can withstand a great deal. Obviously, there’s always a risk involved. But the work this team does from an operations perspective, and a safety perspective, is impressive.

Q. Specifically from a quality and a patient safety perspective, what did you observe that you liked or that you saw areas for improvement?

A. A number of years ago, the organization committed to a power plant that can provide emergency power to the entire hospital. This was completed early last year and was extremely important in our effective response. In the past, you had to move patients to beds that had emergency power. And that is an inherent risk. Every time you move a patient, they get a new nurse and are in a new environment. The fact that every bed is powered now is really meaningful. That was a huge investment but the right kind of investment. That’s the most important work we do on the system and high reliability level.

The other thing is that IT has moved everything from servers to the Cloud, so a flood will not disrupt your systems. I’ve seen that big kind of thinking here. Those are key investments and not easy to decide to do but they protect our patients. The work I saw people do to keep patients safe ­­— and each other safe — was extraordinary.

Q. Is there anything else you learned as a physician leader?

A. I would just stress that everyone who needed to be here was represented. There are times when everyone doesn’t participate, and that can lead to long-term, negative impacts. I can tell you that from our medical perspective, the camaraderie that I saw built during this time was very important.  Nobody was saying, ‘I’m not going to come in; you can take care of my patients.’ They all showed up and took take care of patients together.