TGH patients bring their stories to state leaders in Tallahassee 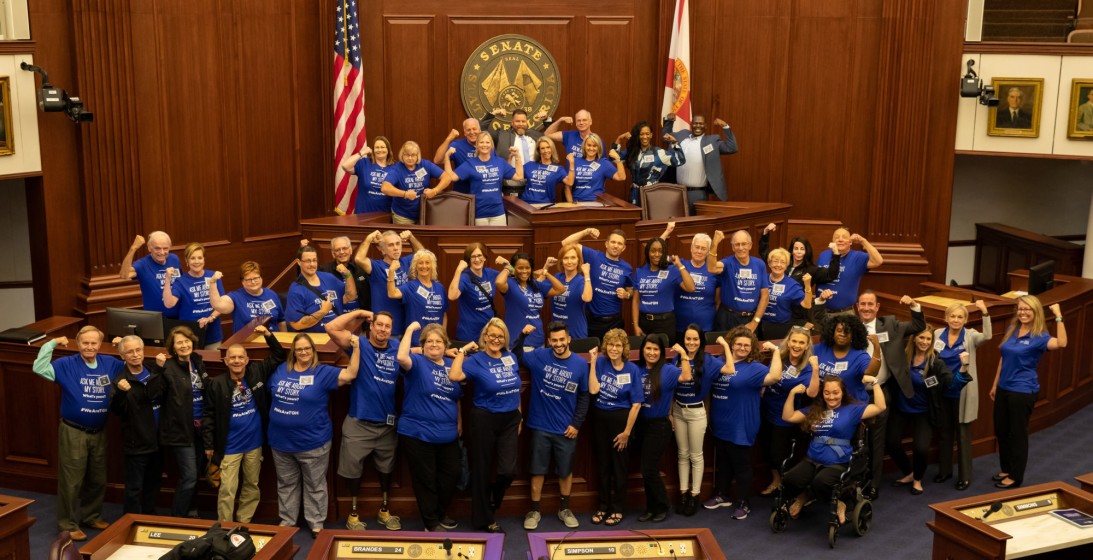 On the first annual We Are TGH Day, state senators and representatives heard from a heart transplant recipient whose life was saved twice by TGH, a patient who got her PhD after having brain surgery, and survivors of an airplane crash and a bear attack.

Their stories made an impression.

“Tampa General Hospital is a quality institution in our region,” said Senate President-Designate Wilton Simpson. “I love their motto because it is true: while others practice medicine, TGH defines it. It was great to see so many patients and families here in our state Capitol to share how Tampa General saved their lives. Congrats to Tampa General for achieving the milestone of 10,000 transplants.”

“We are blessed to have a facility in the state of Florida like Tampa General,” said Lt. Gov. Jeanette Nuñez, who met with the TGH patients and family members in the State Senate Chamber.

State Sen. Janet Cruz also spoke to patients and thanked everyone associated with TGH for their important work.

Unlike many who visit Tallahassee, these patients were not pushing a particular piece of legislation. They simply shared their stories of receiving live-saving and life-transforming care from TGH. The patients wore blue T-shirts that said, “Ask me about my story.”

“Two other hospitals said I was too sick for a transplant,” said Tonya Cajuste, who received both heart and kidney transplants at Tampa General. “Thanks to Tampa General, I’m here working to carry on the legacy of the donor who gave me a second chance at life. I want to help people understand that transplantation changes lives. I have a new chance at touching lives and helping people.”

“Tampa General was the only hospital out of many hospitals that I’ve been to that was able to give me answers, and not only give me answers, but solve my problems,” said Richard Hendrix. He said TGH saved his life twice – once when surgeons implanted an LVAD heart pump, and once when they completed a heart transplant. “They brought me back from stage 4 heart failure and now I’m living a completely healthy life.”

Mike Haggard suffered from polycystic kidney disease, which had killed his mother and uncle, but “three years ago and one month ago today I crossed Davis Island at 5:30 in the morning and saw a rainbow and that day Tampa General saved my life.” He received a transplanted kidney from his brother-in-law, a U.S. Army helicopter pilot, who later returned to the Middle East to fly combat missions.

Haggard said Tampa General’s care is “just a gem that I think every Floridian should be aware of.”

Their words underscored how important it is for all Floridians to have access to a highly advanced hospital such as TGH. Among other distinctions, TGH has now performed more than 10,000 transplant operations, placing it among the top 10 busiest transplant centers in the nation.

“Every one of these patients is a hero,” said John Couris, president and CEO of Tampa General. “They found the strength to survive. And the team at Tampa General Hospital is incredibly proud to have been a part of their journey.”

#WeAreTGH Day had a presence throughout the Plaza Level of the Capitol, with the latest technologies and innovations at TGH on display in the Rotunda and one of five helicopters used to transport critical patients to TGH from 12 counties on display in the courtyard.

“This 10,000 transplants milestone is a symbol of the way Tampa General leads in complex, difficult procedures in many surgical specialties,” Couris said. “Many studies have shown that patients do better when they undergo surgeries in large surgical centers, where the surgical teams perform complex procedures more often. Surgical teams that operate more often become more proficient. Increased proficiency leads to better outcomes. And better outcomes are linked to lower costs. That’s what Tampa General is all about: Quality. Access. And affordability.”

Tampa General is a Level 1 Trauma Center and was the first hospital in Florida to achieve this verification from the American College of Surgeons. TGH also is the only Florida hospital verified as a Level 1 Pediatric Trauma Center by the ACS. Tampa General is home to the only Brain and Spinal Cord Injury Program designated by the Florida Department of Health as well as one of four Florida burn centers verified by the American Burn Association. TGH also is a nationally certified comprehensive stroke center and is the primary teaching hospital of the USF Health Morsani College of Medicine.