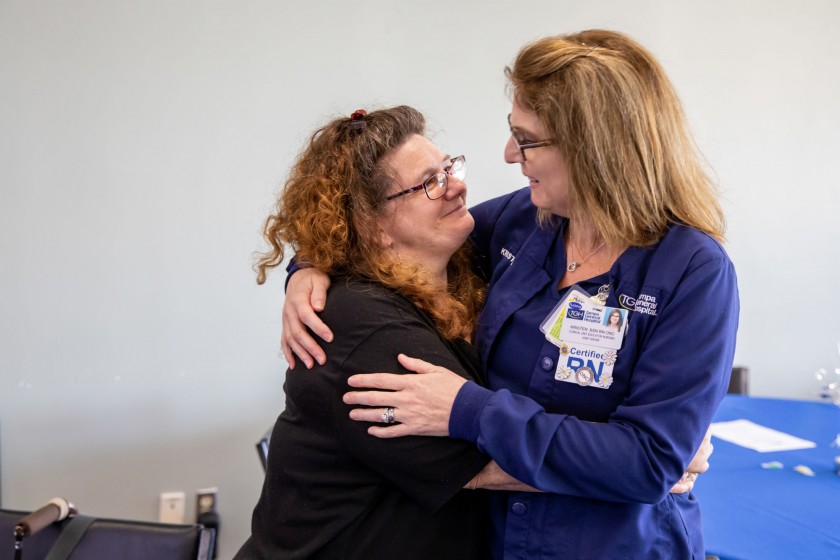 In 2017 Wendy Akins was driving to a company picnic in Valrico. In a split second her life changed forever – a car crossed the center line and collided head-on with the front of her car.

“I looked up and I couldn’t see anything but the air bag,” she said. Within a few minutes first responders were on the scene attempting to get her out of the car.

“They used the jaws of life three times,” Akins said.  Then TGH’s Aeromed medical helicopter arrived and flew her to the hospital.  She eventually underwent four surgeries and was a patient in the TGH Wallace Trauma Center and the Rehabilitation Center for several months.

“All the people at TGH made me feel that they cared. It was like my best friends making me feel better. Thank you TGH and all you do to make a difference,” Akins said.

Former patient Kandi Wenzel recalled how she spent 115 days in the hospital after she was severely injured in a nighttime boating accident near the Sunshine Skyway Bridge in 2007. She was in the boat with friends when another boater was speeding and rammed into her boat. The propeller landed on top of her, causing severe injuries to both legs.

Wenzel was airlifted to TGH where she spent eight days on life support. It took three to four years for her to regain her strength.  “It took me one year to be able to get out of bed,” Wenzel said. She now walks with the aid of a walker or a cane.