Bring on the bacon? Read this before you keto 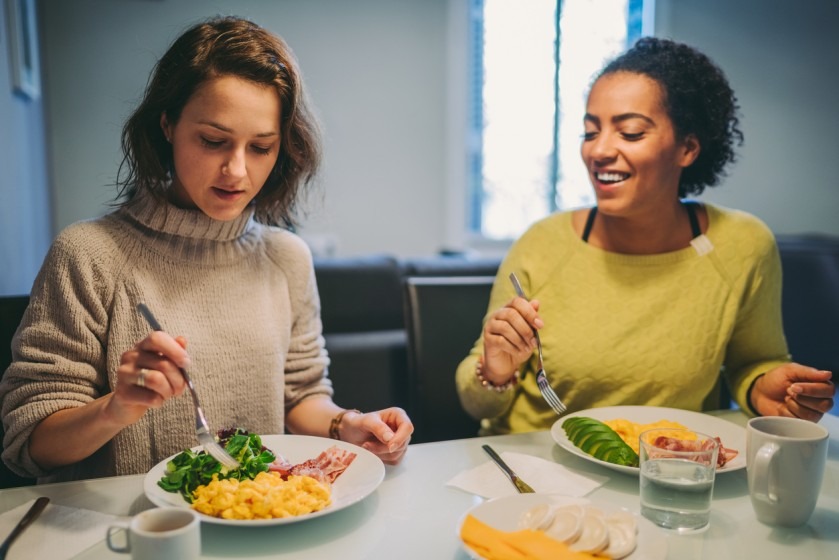 It sounds like a dieter's dream come true. Eat bacon, cheese, steak and eggs. Lavish cream in your coffee and heap butter on whatever you want. Fat, in fact, is the point.

It’s the ketogenic diet, aka “keto,” and it’s all the rage right now for get-thin-quick hopefuls. In a nutshell, the plan limits carbohydrate consumption to a maximum of 30 grams a day and requires ingesting 75-percent of your calories from fat.

What does that look like? And more importantly, what does it taste like? Zero-carb foods include red meat, chicken, bacon, cold cuts and other proteins. An apple has 25 grams of carbohydrates, and blue cheese has 1 gram per ounce. Pasta? Nope. But you can eat as much shrimp as you like.

After a few days of the low-carb diet, the body enters ketosis — the biological term for what is essentially a carb emergency.  Without carbs, the body doesn’t store enough sugar. With no sugar to use for energy, the body starts breaking down fat into molecules called ketones to use as fuel. And that’s when the weight loss kicks in.

For many dieters, that weight loss can be significant. Limiting carb intake has long been a proven and popular way to drop pounds. Putting your body into ketosis, however, takes it to another level.

“There is science behind the ketogenic diet,” said Erika Holt, RDN, a dietitian at TGH. “Our body was made to go into ketosis to allow us to survive during long periods of fasting. It’s a survival mechanism.”

But is it safe?

“Anything that eliminates a specific food group is never a good thing,” Holt cautioned. “There are two reasons for this. First, it’s not sustainable. The diet is restrictive, and it’s difficult to limit our major source of fuel – carbs – to basically nothing on a daily basis. And second, you’re eliminating things that your body needs — vitamins, minerals, fiber and antioxidants. Your body’s going to lack all of those things, and that’s not healthy.”

Variations of the low-carb, high-fat diet have gone in and out of favor since the early 1970s, when Dr. Richard Atkins released a book detailing his popular diet. Today, more than a decade after his death, Atkins-brand foods still tout the low-carb approach.

And although the medical community originally warned consumers against the Atkins method, citing high saturated-fat content as the opposite of heart-healthy, further studies revealed positive outcomes -- but not over the long term. “The immediate improvements in blood sugar levels are outweighed by the loss of fiber, which we know has a multitude of critical health benefits," Holt said, “not to mention vitamins and important antioxidants.”

Interestingly, the keto diet has also been used in clinical therapies unrelated to weight loss. Cancer patients, for instance, have shown improved energy levels and overall well-being when they’re in ketosis.

Epilepsy is another area of study. “I sometimes work with children with epilepsy, and we’ve had success stopping seizures by putting them into a state of ketosis,” Holt said. “Nobody actually knows exactly why it works, but it does.”

To reach the deepest level of ketosis, a 4:1 ratio is key: for every four grams of fat, you consume one gram of carb and protein combined.

A carb-free vitamin and mineral supplement may make up for the missing nutrients in the keto program. But even with that addition, dieters can anticipate the “keto flu” in the first week.

“Until you adjust to not having carbohydrates, you’re going to have side effects,” Holt said. “You’ll likely feel tired and headachy for a few days, because your body’s not accustomed to working off of ketosis.”

An exercise regimen is also vital. “From a weight loss perspective,” Holt said, “a diet that doesn’t require any exercise doesn’t sound like the healthiest approach, does it?”

Instead of keto, Holt endorses an approach that’s more sustainable and doesn’t eliminate the nutrients your body needs. Eat a healthy mix of fruits, vegetables and fiber, and make sure to get cardiovascular exercise several times a week.

As always before starting a new diet or exercise program, check with your doctor.

“There are inevitably going to be fad diets like keto that come and go,” Holt said. “But the wisest approach to weight loss is a balanced diet and a moderate exercise program. The results might not be immediate, and they might not be drastic.

“But you’ll be healthy.”