Pickles and ice cream are just the beginning… 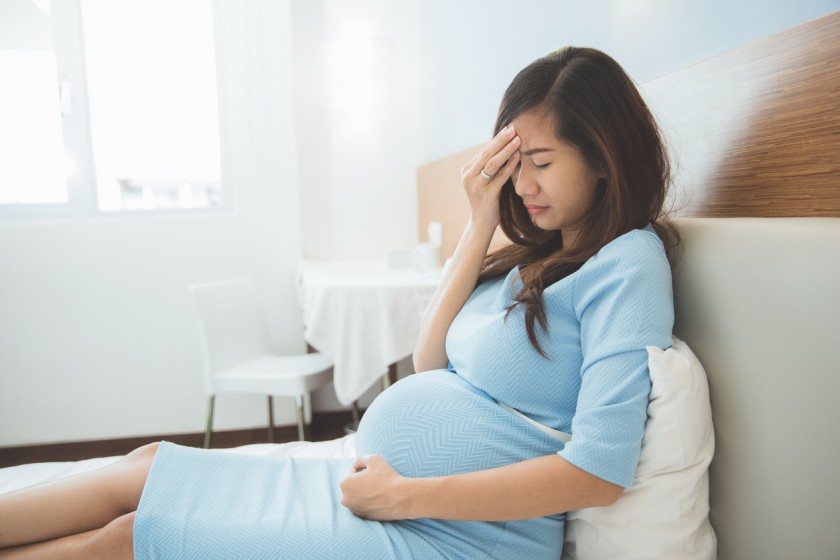 I was gigantically pregnant with our first daughter, popping TUMS like crazy, and suddenly my ears went funny. I could hear myself breathing. It sounded like Darth Vader was echoing in my head.

But I quickly learned that these weird new afflictions are caused by all of the flooding hormones and increased blood and fluids needed to create, grow and eventually deliver that teeny tiny human inside me.

“It can be crazy and it’s not predictable from person to person, or pregnancy to pregnancy,” she said.

Very strange things can happen – some that don’t have definite explanations. Romero has seen women lose teeth or suffer cracked teeth because of pregnancy.

“What does it mean? What’s the purpose?” Romero said, of the study of pregnancy side effects. “We’re just starting to learn all of that.”

Pregnancy is incredible and it’s hard to complain when others battle infertility or loss. But pregnancy can be surprisingly hard. I began the journey thinking I’d just have strange food cravings while radiating a gorgeous pregnancy glow.

Acne not just on your face? Yep.

And along with acne, a whole host of other skin changes – brown patches on your face, oh-so-attractive whiskers and moles? Sigh. Yes.

Feeling all emotions, all the time – from rage to weepiness? Yes.

Insomnia and then, when you do sleep, intense and sometimes terrifying dreams? That too.

I posted queries in two of my online moms’ groups asking for pregnancy symptom stories. The responses were numerous and surprising.

A vegetarian gagged at the sight and smell of veggies. Women who weren’t big drinkers craved vodka and beer (and didn’t have it, of course.) Cantaloupe haters couldn’t eat enough of it. One mom chugged milk all day. When Romero was pregnant, she craved citrus fruit and ice cream with bananas and honey.

“I wish I could explain cravings!” Romero said. “They are unique and odd and having experienced them myself, I can vouch for the fact that they are real and strong.”

Much remains unknown about the causes of weird pregnancy symptoms, such as food cravings, Romero said. Maybe the body craves nutrients it needs. Or maybe your subconscious just really, really wants ice cream.

“A lot of it is the power of suggestion. When you’re pregnant, you think you are supposed to crave foods,” Romero said.

One type of craving is called pica – the urge to eat non-food items, like dirt and chalk. It can get dangerous. Romero said she had a patient who ate baby powder and another who would go to Lowe’s, wait until no one was watching, and lick drywall. Pica can be linked to low iron levels.

What did you say? Whaaaat?

Guess what, preggo ladies? Hearing loss can be a pregnancy symptom, as well as sensitivity to sounds and smell. Many women said they suffered awful ear pain after sleeping on an ear. They battled chronic sinus infections. Dry coughs. Snoring “like a chainsaw.” Constant nose bleeds.

These, unfortunately, are all common.

“Those are related to increased nasal and upper airway secretions and swelling, which also leads to fluid buildup in the ear – hence the pain, and would also explain sound sensitivity and temporary hearing loss,” Romero said. “This is all to be blamed on progesterone, which causes increased blood flow to the mucus membranes of the nose and throat, which also explains the nosebleeds.”

Progesterone can also be the cause of bleeding gums, another frequent complaint.

Many women said they had a metallic taste in their mouths during their pregnancies, like they were “sucking on pennies.” They had frequent (and embarrassing) hiccups and burps. Terrible heartburn.

These are all because the area where the esophagus joins the stomach – which is supposed to be squeezed shut and not allow stomach acid to return up the esophagus – is relaxed in pregnancy, Romero said.

The hormone relaxin can be a cause of that and various other pregnancy ailments. The hormone does what you’d think – it relaxes the body’s muscles, joints and ligaments. Although it centers on the pelvic joints to allow them to stretch during childbirth, the hormone goes throughout the body.

“Lower back pain, hip pain, hips that are looser and more prone to injury – this is all because of relaxin,” Romero said.

Not just a swollen belly

Many moms said they suffered excruciating joint pain in pregnancy. One mom had to wear braces on her hands and arms every day and had to have her husband help her to go the bathroom and change her clothes because her fingers couldn’t move. Several women said their arms and legs would often go numb. A few moms developed De Quervain’s tenosynovitis, or pain on the thumb side of the wrist, and had to have injections and surgery after childbirth.

“Blame numbness and carpal tunnel on swelling – fluid builds up in odd places, including tiny spaces like carpal tunnel, and then you see the effects,” Romero said.

Women said they endured awful sciatic nerve pain throughout their pregnancy. Stepping out of bed, one mom said, felt like being hit by lightning.

“Sciatic pain is the same as that lightning bolt up the leg,” Romero said. “The shifting pelvis and heavy uterus and baby put pressure on the sciatic nerve, and cause those symptoms.”

Others said they had sharp pain in their ribs.

“Rib pain is interesting,” she said. “The angle where the ribs meet the spine is different in pregnancy, and so the nerves that run under each rib can be compromised, and that hurts a lot.”

You are not alone

Never hesitate to tell your doctor anything unusual or worrisome, Romero said.

“They shouldn’t feel weird. They aren’t the only woman to have something odd go on,” she said. “Embarrassment shouldn’t be a reason to hold off saying something. So many women experience so many things.”