Instead, the Inverness mother of five, who suffered from high blood pressure that went untreated, calls it a “stroke of luck.”

“I know it could have killed me,” she said of the stroke she suffered on the family’s ranch in September 2014 that landed her in the hospital for a week. “But I got my second chance and I’m making the most of it.”

That includes taking medication, monitoring her blood pressure twice a day, walking six miles daily and adhering to a healthy, no-salt diet that restricts sugar and caffeine. Not only did she shed 20 pounds, Williams also feels mentally rejuvenated.

“I try to avoid high-stress situations as much as possible,” she said. “Everything about my life is better now. I made my health a priority and it’s paying off.”

Williams is one of about 80 million American adults with hypertension, or high blood pressure, when the force of the blood pushing against the walls of your blood vessels is consistently too high.

That’s one in every three adults.

Worse, only about half (54 percent) of the people with high levels are treating their condition, says the Centers for Disease Control and Prevention.

More than 360,000 deaths in 2013 included high blood pressure as a primary or contributing cause. That’s almost 1,000 deaths each day. A majority of people who have heart attacks, kidney disease, strokes and chronic heart failure have hypertension.

Sadly, many of these deaths are preventable, said Dr. Karna Patel, a primary care physician at the TGMG Carrollwood Family Care Center in Tampa.

“The earlier we diagnosis high blood pressure, the better chance for a good outcome for the patient,” Patel said. “So getting to your doctor every year for a routine checkup is so important. From there, it can be as simple as getting on medication and changing the diet. If we can fix the problem early enough, there may never be a need to see a cardiologist down the road.”

In some cases, Patel said, being in good physical shape may not be enough. He has patients who exercise daily, eat a balanced and healthy diet, keep stress to a minimum and have never smoked – yet they have spiked readings.

Blame that on genetics, he said.

“Knowing your family history is important,” Patel said. “Again, we have to look at several factors to make the assessment and prescribe the course to take that could eventually extend your life. Don’t just assume you’re safe because you’re in otherwise healthy shape.”

Blood pressure medications are available in generic form and are usually affordable for most patients, Patel noted. Some pharmacies even distribute them for free.

Greater efforts to help people reduce blood pressure could be around the corner. A major new study involving more than 9,300 people over 50 by the National Institutes of Health looked at using medication to lower systolic blood pressure to around 120, instead of the commonly recommended target of 140 or less.

The Systolic Blood Pressure Intervention Trial, or SPRINT, found that this more aggressive target reduced the risk of dying from heart-related causes by 43 percent.

The SPRINT trial is “a big game changer,” Patel said. When it comes to blood pressure readings, “the lower the numbers, the better.”

“For a majority of the population, that’s the optimum goal,” Patel said. “The more we educate patients about the risks and how to be proactive about treatment, we’ll have fewer hospitalizations, or even deaths. This is something insurance companies, the medical community and hospitals can all get on board together. It’s time we focused more on prevention.” 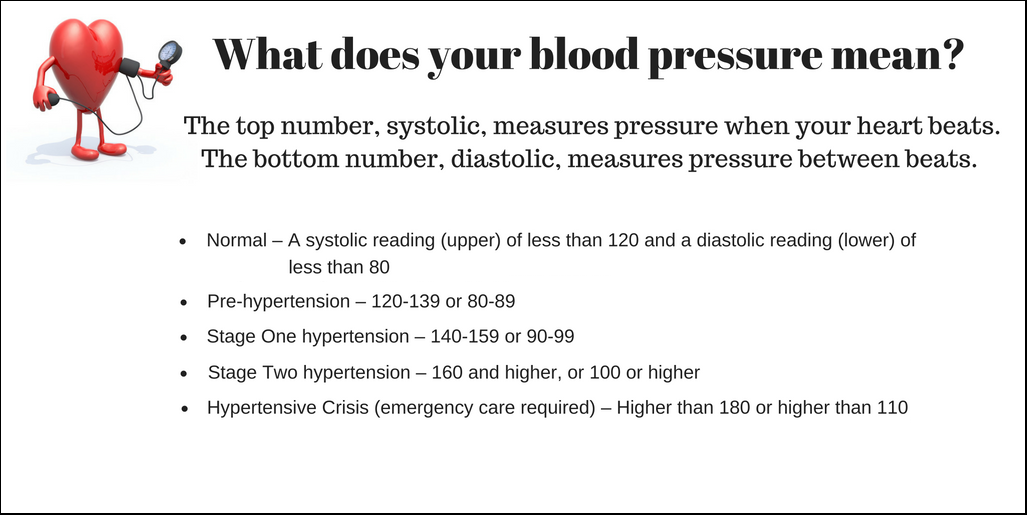