How best to respond to brother's illness? Make lemonade 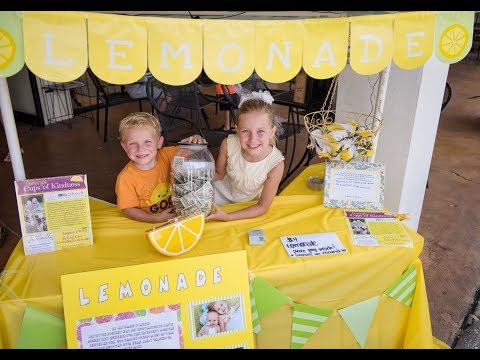 When Avery Ranieri decided she wanted to sell lemonade to help sick children, she had no idea how big her effort would become.

But the lemonade stand that 9-year-old Avery hosted a few weeks ago became a popular and media hit.

In the end, Avery raised $2,820 for the Children’s Medical Center at Tampa General Hospital. She easily surpassed her original $2,000 goal – even though her mother, Melissa Ranieri, secretly feared that her big-hearted daughter’s target was too ambitious.

“I’m so proud of her,” Melissa said. “I can’t believe she did it. When she first said $2,000 [was her goal], my heart sank a little bit. I didn’t want her to feel like she didn’t accomplish something.”

Avery decided she wanted to organize a fundraiser for TGH after being inspired by the experience of her brother, 6-year-old Evan, and her mother. Evan was born with kidney disease and received a kidney from his mother when he was 2. The transplant operation was performed at TGH.

Avery set up her lemonade stand outside TeBella Tea Company, which provided its Earl Grey Lavender Lemonade for her stand. TeBella originally offered to donate half of its lemonade sales on Davis Islands all weekend long to Avery’s cause, but after seeing her lemonade stand in action, the company donated all of the proceeds instead.

The weekend’s sales alone got Avery close to $2,000, and a generous donation from the DeBartolo Family Foundation put her over the top. Once doctors on TGH’s Medical Executive Committee heard about her campaign, they donated $500, bringing her total to $2,820.

Before she set up her lemonade stand, Avery held a business meeting with Jocelyn Lister, annual giving officer at the TGH Foundation, to help her organize the event and set goals. Once the tally was complete, Lister visited with Avery again – this time to discuss how the funds could be used in the Children’s Medical Center.

Lister brought Avery a list of options that her donations could cover. Avery studied each one carefully, and asked Lister how many people she could help with each option. She also discussed which choice would have more lasting impact.

In the end, Avery decided to spend the funds in two ways:

“Our family has been lucky enough to be invited to things like that in the past,” Melissa said. “That helped her to recognize that we would be doing things for families to make special memories.”

In the end, both Lister and Melissa Ranieri hope that Avery’s lemonade stand will have an impact that goes beyond the funds she raised.

“If a little girl can do this to give back,” Melissa said, “Then there’s so much that all of us can do.”