Goldfish are not a meal: finding help for my picky eater 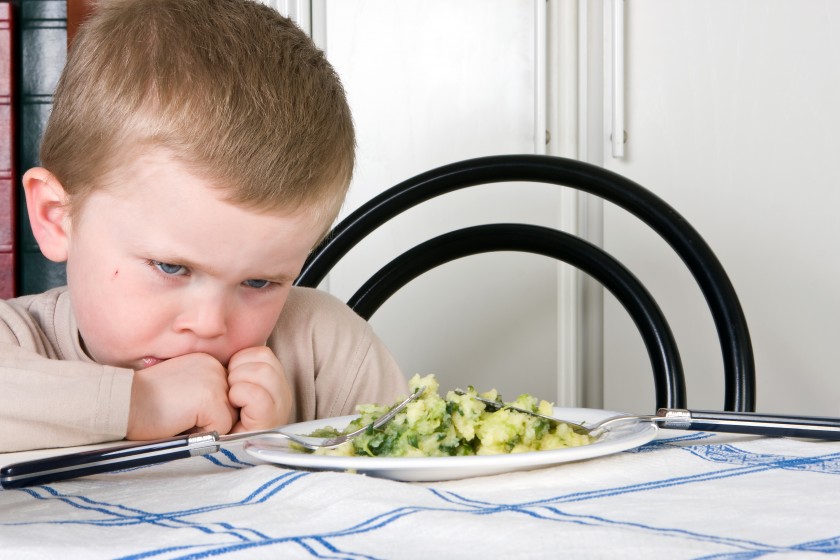 I don’t know how this happened, how rainbow-colored Goldfish, chicken nuggets, and fries became all my 2-year-old daughter, Sarah, wants to eat.

Even before she first gummed her way through solid food, I vowed to make sure my daughter wasn’t a typical picky eater. I read books. I took notes. I swore I’d never use food as a bribe or a reward.

I want Sarah to be happy and healthy. I know children who have weight issues most often carry those pounds into adulthood, which put them at greater risk for illness . And the American Heart Association released a shocking statement last month that said the habits of most children today will lead them to heart disease.

So we were relieved when at first, Sarah ate everything, grabbing cooked spinach with her deliciously chubby fingers, shoving handfuls into her mouth. She ate roasted Brussels sprouts and even sardines in olive oil. Quinoa was one of her first words.

It happened so slowly, our loss of real food, our descent into Snackdom. It’s like walking and being lost in thought and then looking up and not knowing where you are or how you got there.

But now Sarah, who is amazingly wonderful in so many ways, wants snacks. All. The. Time. Goldfish, popcorn, yogurt-covered raisins and pretzels, cookies. For dinner some nights, confession: I’ve been baking frozen chicken nuggets and fries.

It’s our fault as parents, I know, and before having kids I would have been totally judgy while reading this. “Just don’t bring that junk into your house! Problem solved.”

As other parents will understand, I never knew true exhaustion until being a mom. I’m also pregnant, and I’M SO TIRED. Two-year-olds, while being hilarious, heart-melting little creatures, have surprisingly strong wills and unbounded energy. You get worn down. And when you’re tired -- and fed up with spending time cooking food she then refuses to eat -- you start going for what’s easy.  We need a reboot, especially before Baby #2 arrives.

So I enlisted the help of an expert.  Melissa Odorisio, MS, RD, LD/N, CNSC, is a clinical nutrition specialist at Tampa General Hospital who blogs her healthy recipes on TGH Health News and at Garden Goddess Kitchen. Here are her tips – and a few recipes -- on how to get picky kids to eat healthier food.

“One of the best things is for parents to lead by example, including having family meal time,” Odorisio said. “A lot of the time, children will pick up on behaviors from their parents.” This means you also need to eat your veggies.

“Avoid any negative emphasis on food or eating behaviors.” Offer them healthy food and let them choose whether or not they will eat it. Don’t force children to clean their plates or to stay at the table until they eat their food.

Eliminate distractions. Don’t have the TV on while eating. No toys at the table. Keep it short, to 30 minutes or less. “Try to get them focused on the meal.”

Create a three meal, three snack system: breakfast, snack, lunch, snack, dinner and a snack before bed. “You choose what’s going to be offered. If they refuse a lunch, their next snack is in about two hours, so it eliminates some of the stress,” Odorisio said. The child might get really hungry, but will survive.

Aim for healthy snacks, such as apple slices and cheese, yogurt, or toast with banana and peanut butter. Odorisio loves these chocolate sweet potato balls. Sarah, who has stopped eating all fruit except for the occasional blueberry, picked out freeze-dried strawberries at the store. “These crunchy strawberries are nummy, Mommy!” she said.

“Make it fun,” Odorisio said. Cut food into shapes so they look like snacks, like pancakes or waffles. You could make nachos out of sweet potatoes. For Sarah, who refuses to sit at the table for breakfast and only wants to eat snacks in the morning, she suggested making breakfast a picnic on the floor.

Keep trying. “I know it’s frustrating to keep making and offering the same thing, but eventually they might try it,” she said. “If they don’t eat it, try not to put too much focus on it.” But serve it again.

“Get the kids involved in food preparation or cooking,” she said. At the grocery store, have them pick out a new fruit or vegetable to try. Ask for their help cooking. Odorisio’s super moist banana bread would be a good fall treat.

Sneak fruits and vegetables into their diets however you can. Puree vegetables into spaghetti or pizza sauce. Mix pureed butternut squash into macaroni and cheese. Odorisio also suggests experimenting with smoothies, such as her red velvet smoothie and a carrot cake smoothie.

Shortcuts are okay. Odorisio recognizes that most parents don't have time to cook a whole dinner from scratch every night. It's okay to use pre-cut fruits and veggies, frozen veggies, or those you can steam in the bag. Other timesavers: set aside time to cut veggies and prep several meals, or cook enough for two meals and freeze the extra.

Think of healthier versions of what your child wants to eat. If she only wants pasta, try healthier options: whole wheat, brown rice noodles, or quinoa noodles. You could use a spiralizer and make sweet potato or zucchini noodles.

Drink water as a main beverage. Either don’t offer juice or keep it to one cup a day. Smoothies are okay, Odorisio said, because they are pureed whole fruits and vegetables. If the child drinks milk, then no more than two to three glasses per day.

Keep going, and try to relax. “Continue to offer what you think is a healthy meal,” Odorisio said. Soldier on with putting fruits and vegetables on their plates. “Keep trying to expose them to new foods.” For healthy children, she said, “they will eat when they are hungry.”