Splat. Do you still believe in the five-second rule? 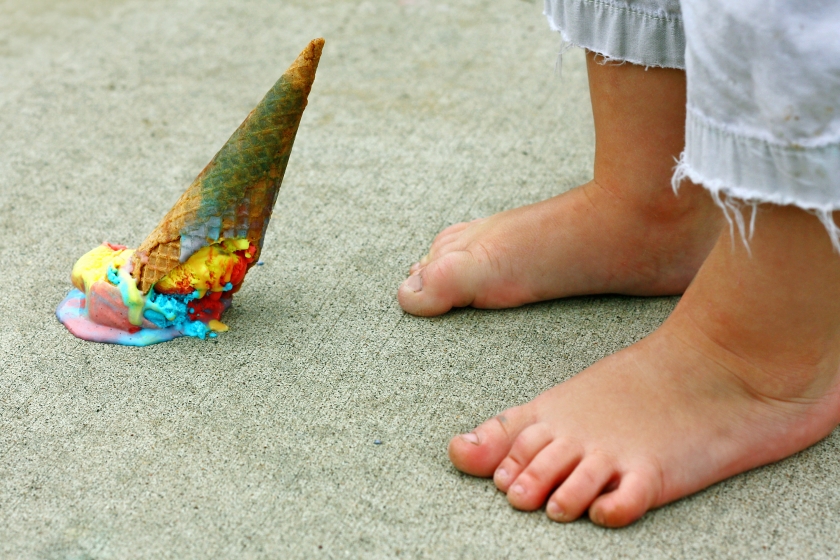 We’ve all been there. You accidentally drop a bit of food on the floor. You pick it up. Should you eat it?

Well, it depends. How delicious is that food? How dirty is that floor? Should you invoke the “five-second rule” and pop the yummy morsel into your mouth?

We all grew up hearing this rule:  Food dropped on the ground is okay to eat if you pick it up within five seconds. If you react quickly enough, surely that cookie didn’t have time to get contaminated. Parents live by this.

Unfortunately, a disappointing new study published in the journal Applied and Environmental Microbiology finds that the so-called five-second rule is bogus. It turns out that food picks up bacteria as soon as it hits the ground, although the amount of bacteria depends on how wet the food is and what kind of surface the food gets dropped on.

In light of that, what are parents supposed to do now?

“You just have to use common sense,” advised Dr. Patricia Emmanuel, chair of the Department of Pediatrics at USF Health. “If you drop food on a locker-room floor or a bathroom floor, it’s a lot different than if you’re in your living room and a cookie falls on the floor. In a normal child with a normal immune system, it’s probably not going to hurt if you drop a cookie and you pick it up and give it to them.”

The Rutgers University researchers who conducted this peer-reviewed study – aptly titled “Is the Five-Second Rule Real?” – were really, really thorough about dropping food on the ground.

They dropped four kinds of food – watermelon, bread and butter, plain dry bread, and gummy bears. They tested four types of flooring – wood, carpet, stainless steel and ceramic tile. They measured how much bacteria got on the food after four different lengths of time on the floor – less than a second, five seconds, 30 seconds and five minutes.

The results: The wettest food, watermelon, picked up the most bacteria. Gummy bears picked up the least, and bread was in the middle. Tile and steel floors transferred more germs than carpet or wood.

Bacteria got on the food immediately, although the longer the food was left on the floor, the more germs it picked up.

The unanswered question here is: What kind of germs are on your floor?

News reports about the study have drummed up a lot of buzz and debate about how seriously to take this.

After The New York Times published a story about the five second rule , an Indiana University pediatrics professor responded with an essay noting that such things as cell phones, kitchen sponges, cash, ATM buttons and gas pump handles probably have more germs than your kitchen floor. He added that the best way to prevent food-borne illness is to simply wash your hands before you eat.

“If I drop food on the floor, I still eat it,” wrote the professor, Dr. Aaron E. Carroll. “The harm I might get from the floor is not worth my concern compared with many, many other things.”

Emmanuel added that researchers believe a lack of early childhood exposure to germs makes children more susceptible to allergies. In other words, a little dirt isn’t the end of the world. “Keeping your child in a completely sterile environment isn’t the best thing. Families that have pets and large numbers of children have fewer allergies and less asthma.”

“When you see where a kid’s hands go, a little food off the floor is not an issue,” said Merrilyn Carey Johnson, a Zephyrhills pre-K teacher and mother of two. “My sister’s immunology professor in medical school told her class that all kids’ toys should be rolled in dirt before they are given to them. A little germ exposure is a good immune system boost.”

Erin Huelskamp, artistic director of St. Petersburg’s Sunshine City Opera and a mother of 1-year-old twins, agreed: “When it comes to germs, you want them to build their little immune systems.”

“In my house, food gets on the floor all the time. I let my children eat it – within reason,” she said. “It’s one thing if it’s Goldfish crackers. If a cupcake hits the floor, I’m not going to scrape up the icing.”

Mike Brassfield is a contributor to TGH Health News.