A Bold Choice to Fight Epilepsy 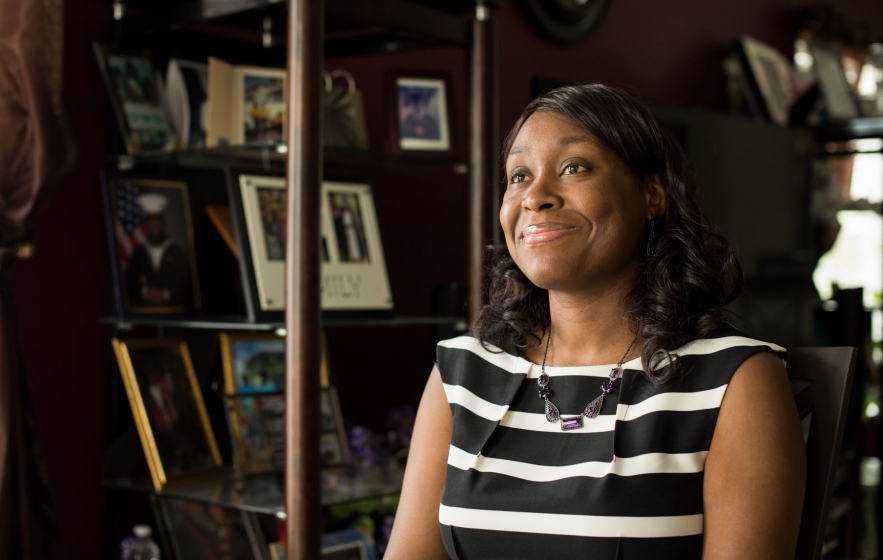 It was scary enough for Letitia Browne-James’ parents to witness their child’s epileptic seizures. But they were also frightened when a doctor suggested brain surgery for their 12-year-old.

“My parents said ‘no way,’ “Browne-James said. “It was a very scary thought.”

They tried medications, the first step for most of the more than three million U.S. epilepsy patients.  But Letitia, like almost a third of patients with epilepsy, could not find a medication that worked. And so for more than 20 years, Letitia fought a losing battle against epileptic seizures that slowly eroded her quality of life.

Finally, at age 31 and desperate for a cure, Letitia took that final dramatic step: brain surgery. This is the story of her journey to become seizure-free.

For thousands of epilepsy patients, brain surgery can be the best option to end seizures. But for these patients with uncontrolled seizures, Browne-James’ experience is typical. Most who eventually have surgery wait 15 to 18 years after diagnosis.

Researchers estimate that well over 100,000 epilepsy patients are good candidates for surgery. But each year, only about 3,000 receive it.

“Surgery is the most dramatic thing you can do to treat epilepsy,” said Dr. Selim Benbadis, director of the Comprehensive Epilepsy Program at Tampa General and University of South Florida. “But these misconceptions exist. We see patients all the time who say, “Oh, my neurologist said, ‘Don’t do that. That’s a last resort before you die.’"

For many patients, the risk of uncontrolled seizures is higher than surgery itself, Benbadis said. Two recent studies found most patients were seizure-free afterwards.

“If things aren’t working, there is a next step,” said Benbadis, also a professor of neurology at the USF Health Morsani College of Medicine. “Get to an epilepsy center, preferably Level IV, and see what’s causing your seizures and what your treatment options are.”

Patients who visit such a center may even discover they don’t have epilepsy.  Up to one-third of them are misdiagnosed.

Browne-James, who lives in Orlando, had her first seizure when she was six months old – and then not again until she was 10. She was diagnosed with epilepsy, an electrical disturbance in the brain that causes seizures. She tried one medication, then another.

But at least once a month, she would have a seizure.

She chafed against the limits that came with epilepsy. She wasn’t allowed to go swimming. Or play too far from home.

She feared having a seizure in school or in church, while she was acting or dancing on stage, or, as she got older, on a date. When she met her future husband, Jonah James, Jr., through mutual friends, she told him about the disease right away.

She worried about her wedding day.

“I prayed really hard, just asking God to allow me to let me make it through that day without having a seizure,” she said.

Her seizures gradually got worse, occurring at least once a week. Now a counselor, she worried about having a seizure in front of a client.

Browne-James wasn’t able to drive. She lost a tooth. She cut her knee so badly that it required stitches and left a sprawling scar. She lost count of the cuts and bruises and hospital visits, all caused by seizures she couldn’t remember.

She tried more medications, and grew increasingly frustrated. About three years ago, Browne-James joined a website that has an epilepsy forum and began to talk with other patients.

The website, called PatientsLikeMe, became her lifeline. It prompted her to find an Orlando neurologist who specializes in epilepsy, called an epileptologist. She learned about brain surgery. Her new doctor gave her the names of three hospitals in Florida where the surgery is performed.

When she called the first one, the doctor there said the hospital could perform her surgery. But he told her she would be better off with a center that performs the surgery more often. She said he recommended Dr. Fernando Vale, surgical director of Tampa General’s epilepsy program and vice chair of USF Health’s Department of Neurosurgery and Brain Repair. Tampa General is the busiest epilepsy surgery center in Florida.

Browne-James underwent an extensive evaluation to see whether surgery would help her.  Doctors like Benbadis can identify what part of the brain the seizures come from and evaluate whether it controls any essential cognitive functions.  They can also see which side of the brain is dominant.

“We need to educate patients and physicians more,” said Dr. Vale. “It’s still delicate surgery, don’t get me wrong, but people talk about surgery as scary, how it will disfigure them. And there are misconceptions among neurologists. We are trying to reduce these fears and reassure patients it’s a safe operation.”

The extensive neurological testing and use of two-inch long “keyhole” incisions can help reduce those fears, he said. As the day of the surgery grew closer, Browne-James wasn’t scared.

“Everyone thought I was crazy because I was very excited and counting down the days to brain surgery,” she said.

Dr. Vale removed a tiny piece of Browne-James’ brain, about the size of a sugar cube.  Browne-James marveled at how small the scar was.

She hasn’t had a seizure since. And her cognitive abilities are fine; she’s now working on her PhD.

Since her surgery, Browne-James has become an outspoken patient advocate. She’s made a video for PatientsLikeMe and frequently speaks with patients and medical researchers about the need for patients to be informed about their care.

One of those patients was an 11-year-old girl. The girl went on to have surgery and has been seizure-free since.

“She doesn’t have to grow up like I did,” Browne-James said. “Living with epilepsy and planning her life around it.”

For more information about the Comprehensive Epilepsy Program at Tampa General Hospital, contact vkelley@tgh.org or call (813) 844-4675.